The Avengers is one of those great movie success stories.  It wouldn’t surprise me if in years to come, the first section of the Marvel Cinematic Universe was studied across the world as the franchise story.  How so many people came together to plan out a project that on paper didn’t look like it would work.  At all.  What’s that?  Make five films that all lead up into one great big group story, using characters not really that well known outside of the comic book world or have made extraordinarily terrible films in the past?  Using actors and directors not commonly associated to work within the genre, or cast complete unknowns in major parts?  Madness I say!  And yet, here we are, having seen the release of an absolute box-office smash, that pleased critics and fans alike, featured action and sass and beefcake and cheesecake and any kind of cake apart from real cake (but some shawarma) and… suddenly, it’s all falling to pieces with the DVD release.

Where could it go wrong?  This is the hot property of the year, with more special editions and box sets and combined editions coming out than you could shake a stick at.  It’s like being in a candy store, if the candy store were full of eagerly anticipated DVDs. 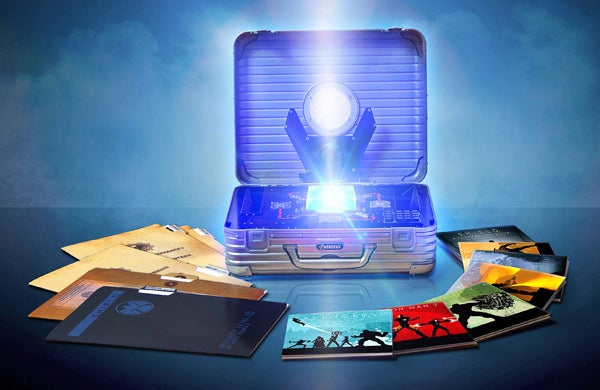 The first problem was with the combined Marvel Universe box set in a special tesseract box.  This was the holy grail of Avengers related DVDs; very limited edition, very special features, very expensive price tag.  Your dear writer was saving up her pennies for this one, agonising over whether she could get one, hoping that they’d stay in stock just until loan day… well, I don’t have to worry about it any more because the release is delayed until next spring.  Marvel Studios and Disney are being forced to hold back on the release because of a lawsuit.  The German designers of the original prop suitcase used to hold the tesseract are suing for breach of copyright, claiming that the companies neglected to get the proper permissions to reproduce one of their designs.

However, the actions of Disney concerning other DVD and Blu-Ray releases in Europe, especially the UK, have a horrible money-grubbing funk about them.  You see, there’s a chance that the Avengers DVD you buy will not be the full theatrical cut.  In Germany there’s a very crucial cut in a very crucial scene; when Coulson is fatally wounded by Loki, the censors have decided to cut showing the spear coming out of Coulson’s chest.  Perhaps this is because the censors in Germany are a little more conservative than those in the UK.  The British Board of Film Classification judged the scene to be distressing, but pivotal to the climax of the film and the motivations of the characters.  That’s why it wasn’t cut from the theatrical release – it was too important to be lost.  Then why is it that it’s been deemed inappropriate for the British DVD release?  This scene has now been re-evaluated by some higher up somewhere as being too upsetting for a 12 rating.  What was fine for you to watch in a cinema is not okay to watch in the comfort of your own home.

This doesn’t bother me too much, because I’ve got an Italian copy that has no qualms about showing a tiny speck of gore.  No, what bothers me is that it’s clearly related to the other problem.  All the major retailers (HMV, play.com, Tesco, etc) all have different versions with different special features. They are all wildly different from each other, meaning that if you’re a dedicated fan (i.e. me) in order to get all the special features available – but not the director commentary promised – you have to buy all of them.  Or, as Disney have proudly announced, buy their regionless Blu-Ray import!  It even restores that bit where you can see where Coulson gets stabbed!

Ah, I understand now Disney.  You want them to pay for the privilege of having you ship in their film especially for them, and potentially buy all the DVD copies they can get their hands on.  Increase those healthy box-office receipts some more.

My advice?  Well, try to get a European copy if you just want the film, no frills, no fuss.  If you want The Avengers with bells attached, wait a while.  I’m guessing there will be a super mega awesome edition, with lots of bells, buzzers and whistles attached, like the extended Lord of the Rings boxset.  It’s just a shame that the company are fumbling around and letting down the fans.

I heard about this and was shocked to hear they’re recommendation was to buy a US version of the disk. That’s not really a solution. Just a workaround. What a screw up this Blu-Ray release has been.

Crazy. Do they actually think that this sham is going to work?