opefully you have heard of Kickstarter.

It represents the beginning of huge paradigm shift in independent publishing. If you have not heard or do not remember the xkcd cartoon, here is the low down.

Kickstarter is a crowdfunding platform which allows users to donate towards their favourite ideas in return for either goodwill or if they give more, the product when it ships. The unique feature is that there is a time limit, so that if the amount required is not raised, nobody is charged. This means that you cannot end up sponsoring an underfunded project and that the creator knows within a finite period whether they have been successful. It is not without risk of course, the company could go bust and fail to produce whatever they said they would (Kickstarter does have a policy on this, but it is unclear how often the website takes measures) but a lot of power is moving towards independent producers catering to a small group of loyal fans rather than large corporations scared to move anywhere other than where the most money lies.

I have been looking for a number of weeks and here are three interesting Sci-Fi kickstarters that are worth a look; one game; one comic and one art piece. 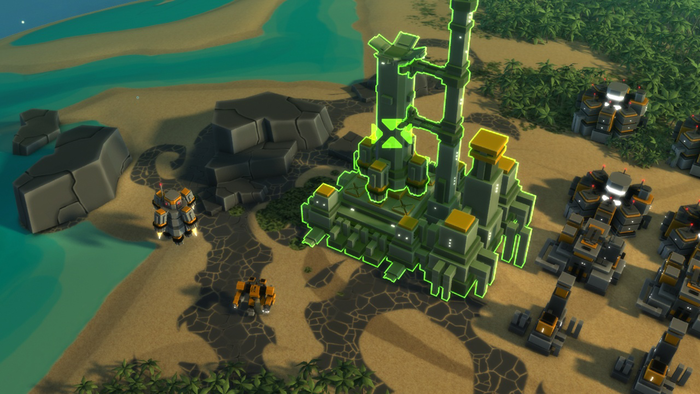 This beautifully realised space opera RTS (Real Time Strategy) draws upon recent advances in modular space travel – you can place your attack suits on Saturn 5 style rockets to be sent into orbit, boosters detonating in turn – all presented in a geometric cartoony style. In order to counter the spread of your rivals across the universe you can set up your own offensive facility on their planet or one of its moons or alternatively attach engines to the side of an asteroid to blow the offending planet to smithereens. As a result of outdoing its original target, there are now water, lava and gas planets that would not have been included in the game otherwise. The soundtrack and voiceover are epic and it seems like they have pretty good gravity simulation too, which is always a plus.

Sea Breeze Lane follows a boy growing up on a colony on the moon in a society where earth is a myth. Graphic novels are perhaps a greater risk than games because there is less content to view, however the reward can be greater too. $5 (£3.10) will get you 2 badges and a PDF and actual copy of the first part of the novel which seems like a phenominally good deal even after P&P. Sea Breeze lane has an interesting premise and despite being relatively uninitiated regarding graphic novels, I feel the refined style adds strength to the piece.

Anyone who enjoys Star Wars can hopefully acknowledge that Thermal Detonators are cool (no pun intended [but I’ll happily take it]). While I am not going to say that spending $50 on a replica detonator is a good idea, it is quite kitsch and it is good to see such Sci-Fi art projects on kickstarter. Steampunk in particular does pretty well, but I could not find anything of interest which was still open for donation. If you just like the idea you can donate at a lower level or just watch the updates which will follow if it is successful and sometimes even if it is not.
It has been fun to put the hours I spend trawling on Kickstarter to some productive use and if people enjoy any of this then I would love to do some more (on board and card games if there is enough interest). It is great to watch small entrepreneurs being blown away by community support – I saw one project that fulfilled its goal in the first day – and break the current cycle of boring, riskless products by large companies. “Caveat emptor” is perhaps more true here than elsewhere, but most of all, have fun.
Castle StoryKickstarterscience fictionSea Breeze LaneStar Warstechnology