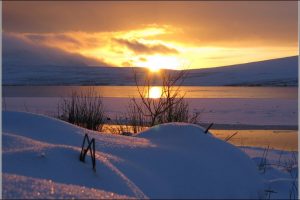 With record snowfall in Beijing, India in the grips of a cold snap and much of the United Kingdom suffering from uncharacteristically low temperatures, one might be forgiven for thinking that the entire Northern Hemisphere is currently a good poster-child for a Roland Emmerich disaster movie.

What few people have been asking, however, is why has this happened?  Why is it so cold over such a wide geographical area? 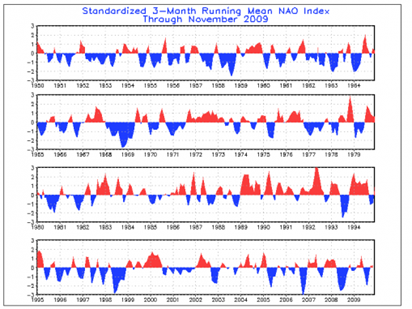 The graphs above display the last sixty years of data collected from both indexes.  The two tend to follow similar patterns, though are by no means identical.  Cold snaps like these seem to occur when both the Arctic and North Atlantic indexes fall simultaneously, and dramatically.

This appears to be what is happening in the Northern Hemisphere right now.

Both AO and NAO indexes are in a negative phase ““ the Arctic’s being a particularly drastic one.  A similar index for the Pacific was also seen last year to have fallen into an usually negative phase, making this a truly global climate shift.

Quite how this links to global warming remains unclear, but many scientists have long loathed the term global warming since events like these would be used as evidence against the much-preferred term of climate change.  Scientists have claimed hotter summers and colder winters would be a mark of a changing climate ““ one becoming more extreme.

Whether this is a blip, or the beginning of a longer trend, remains to be seen.  No doubt it will be a source of much debate amongst meteorologists.

One thing’s for sure ““ it’s an intense cold snap that probably won’t be disappearing overnight.