Analysis and News
by Traveling With Jim 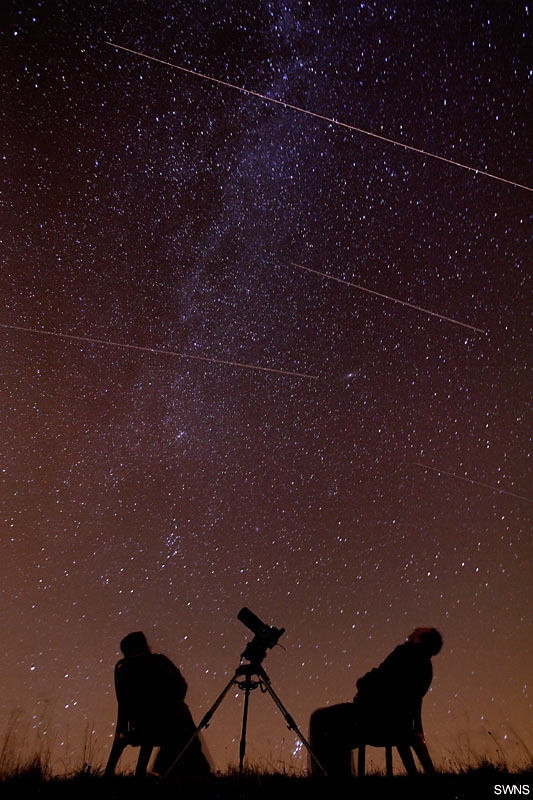 Earth, like a speeding car, races around the Sun sweeping up everything in its path. There are no insects in space, at least none that we know of, but there are plenty of meteoroids, little flakes of dust from comets and asteroids. They hit Earth’s atmosphere and–splat!–they disintegrate as fiery streaks of light called meteors.

This week lots of meteors will appear over Earth’s northern hemisphere when our planet plows through a swarm of dust shed by periodic comet Swift-Tuttle. It’s the annual Perseid meteor shower, which peaks on August 11th and 12th.

Earth has a windshield? It’s the atmosphere, which protects us from solar wind and comet dust much as a car’s windshield protects passengers from wind, rain and bugs. Earth’s front windshield is the early morning sky. Earth circles the Sun dawn-side first, scooping up whatever lies on that side of the planet. That’s why it’s usually best to look for Perseids just before dawn.

A good time to see Perseids this year is before dawn on Wednesday morning, August 12th, when Earth’s front windshield is overhead. You could see dozens of meteors despite the glare of a 66% gibbous Moon.

Side windows, the ones to the left and right of passengers in cars, are good, too. Zooming down a bug-infested lane, side windows don’t intercept many insects, but the ones they do gather are worth examining. Bugs that strike side windows do so at a shallow angle, leaving long and colorful streaks.

This also happens to meteors. When the constellation Perseus (the source of the Perseids) hangs low near the horizon, meteors streaming from Perseus will skim the the top of Earth’s atmosphere, much like a bug skimming the side window of an automobile. Astronomers call these meteors “Earthgrazers.” They tend to be long and colorful.

Earthgrazers don’t come in large numbers. The special geometry required to produce them keeps counts low, but even one or two is enough. A breathtaking Earthgrazer is the sort of meteor you’re likely to remember for years.