On Friday 29th May 2009, the BBC announced that the fifth seriesâ€™ companion will unfortunately not be Hannah Murray from Skins fame.

Instead, itâ€™s the rather surprising choice of  relative unknown, and I hate to say that because itâ€™s such a horrible term, Karen Gillan. 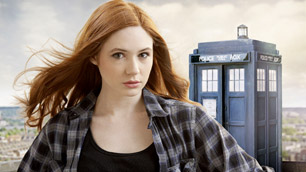 â€œGillan said: "I am absolutely over the moon at being chosen to play the Doctor’s new companion.

The show is such a massive phenomenon that I can’t quite believe I am going to be a part of it.

"Matt Smith is an incredible actor and it is going to be so much fun to act alongside him â€“ I just can’t wait to get started!"

Lead writer and Executive Producer, Steven Moffat, added: "We saw some amazing actresses for this part, but when Karen came through the door the game was up.

Funny, and clever, and gorgeous, and sexy.

Or Scottish, which is the quick way of saying it.

What that article doesnâ€™t say is that Karen has actually appeared in Doctor Who previouslyâ€¦. in series 4, no less. Donâ€™t feel bad if you canâ€™t remember her thoughâ€¦ she appeared in â€œThe Fires of Pompeiiâ€ (good episode, check my review ^_^)  as one of the Sybilline Sisterhood. A lot of makeup, and heavy headwear.

She looks perfect. Not what I expected, and yet thereâ€™s something just quirky enough about how she looks to belong in Doctor Who.

Itâ€™s just another indication of how confident the BBC are in Doctor Who as a property and Steven Moffat as a programme producer. The emphasis here is on ability, not star names. I refuse to believe that Moffat would be casting these younger actors if he didnâ€™t believe they were up to the job! Heâ€™s a self professed fan of the show. With some of the most critically acclaimed episodes of nuWho under his already ample belt.

All eyes are looking to him and fellow Producer Piers Wenger to keep the show going without RTD.  Iâ€™m feeling most especially confident they will do more than just fine.

The only thing I want now is to see Eleven in costume. Câ€™mon cream coloured short style detective anorak coatâ€¦

In another odd season for renewals and cancellations, it has been announced that Joss Whedon’s Dollhouse will be picked up for another season despite highly disappointing ratings in the later episodes. Network execs claimed they had factored in Firefly’s subsequent […]

Star Trek continues to impress, this time at the box office.

The studio had estimated the movieâ€™s weekend box office haul would be in the region of $50 million, but turned out to be a whopping $76.5 million.

Whatâ€™s more, the movie haul improved from $26.8 million on Friday to $27.4 million on Saturday, which, according to analysts, suggests the film will have â€œlegsâ€ and hopefully a long successful run.  It should certainly benefit from word of mouth.

Experts are now confident the movie should take in $200 million in the United States this summer, and Star Trek is a show which should benefit from a strong international market as well.  Abramsâ€™ Trek could be on its way to becoming the most successful Star Trek of all time.

As usual, if you feel like your opinions just can’t be summed up in a simple vote, feel free to discuss it by leaving a comment.

In Brief:  It’s lived long, and now it finally prospers. In Detail:  It’s been a very, very long time since I’ve watched the popular folk around me gasping as photon torpedoes smash into something. Even longer since I’ve heard the […]

Trekkies Bash New Star Trek Film As ‘Fun, Watchable’ Onion News, well known for its satire, has taken a hit at the new Star Trek movie. As always, it’s professional and fantastic.  Well worth a look.