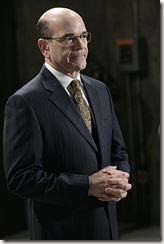 Stargate actor Robert Picardo recently announced that the Stargate Atlantis finale – ‘Enemy at the Gate ‘ was a “well crafted” piece of television.

“Enemy at the Gate” is by no means Atlantis’ worst hour – not even close.  In fact, by the second half of Season Four’s mediocre standards, its outstanding.

However, that’s scarcely enough to merit calling it “well crafted”.

The pacing is fast – too fast.  What the viewed sees resembles a two-hour story chopped down and squeezed tightly into forty-two minutes of television.  The plot devices used are typical of an increasingly unimaginative Writers’ Room, and the absence of any extended resolution which would surely have propelled this episode into a higher stratum of quality is strongly felt.

The plot had potential, don’t get me wrong, and it does indeed tie up some ends (unlike SG-1’s ‘Unending’), but it is not a great finale.  It’s barely a good one.  It’s a decent episode, and that’s all.

One must hope that the laissez-faire habits of the Atlantis creative teams are not carried on to Stargate Universe, or else the once vibrant franchise may dim to a faint ember.  Perhaps that metaphor is a clichÃ©, yet it seems strangely apt for a show that revels in repeating its own weaknesses week in, week out.

Robert Picardo, you’ve done some fine television.  How did you conceive this to be ‘well crafted’?

Judging from many people who have posted around the web and already seen this episode, courtesy of a leaked screener copy and downloading, a common complaint was that the episode felt ‘rushed.’

It’s hard not to reach that conclusion. It is rushed – very rushed.

It’s a shame, cause it has potential to be a great story over two hours.

It shouldn’t be a surprise that the ending didn’t do the show justice. They fit in as much as they could, because it was axed after season 5 was already written. TPTB knew sooner, but didn’t tell cast, crew or writers. From Season 3 to 4, it took several shows to wind up to the cliffhanger and at least 3 to resolve the (major) plotline. When they killed Atlantis, they did have time to resolve what was started. Atlantis and her fans deserved so much better than what they got.
———————————-
———————————-

Also, I hope you will consider joining us to save Atlantis. The websites listed below info & postcards & stationary, either blank or w/ choice of 2 ready to print messages.

I suspect “well crafted” is what you say when you have a show to spruik and can’t bring yourself to say things like “fantastic” or “enthralling”.

Well…it can be rushed and not tie everything up just at SG-1’s unending did not. That way they can sell more of the direct to dvd movie that is being made.