Doctor Who: Series 4: The Unicorn and the Wasp

And we’re back on form again! Quite simply, this episode was firing on all cylinders from the onset. I don’t know if it’s the period setting, the writers’ strength, the familiarity with the central historical figure, or just damn good comic timing, but this episode is another example of how I’ll be able to quite happily just watch one episode after another of this series when it is released on DVD.

It’s 1926, and the Doctor is taking Donna to a tea party on a lawn of a country estate. Same old psychic paper and charm to get inside the doors, introductions to the principle characters and then of course, the real hook for this episode, and as if you didn’t know it was going to happen after last years tease at the end of “˜Last of the Timelords'”¦ the appearance of Agatha Christie.

I must confess, I have never actually taken the time to read an Agatha Christie novel. But even then it’s surprisingly easy to spot the staples of the genre she wrote for and it’s perhaps this that gives the episode its sense of pace, and above all, fun. You see you have the classis tease for a murder mystery, the murder itself, at the very start of the episode. You then introduce the detectives, Perfect Ten and Noble Donna, and then you introduce the suspects. Slowly but surely, you discover layers to each character, hidden motives and possible agendas, secrets and lies. Other minor players get “˜bumped off’ as the story progresses, a suspect or two wind up dead as well, until finally all the suspects are gathered in one room, and you are left with the reveal of the villain of the piece.

It’s a neat premise, extremely self-assured in its own right, and the writer here, Gareth Roberts, might have had tremendous fun crafting the story. I only managed to spot a few in jokes to Agatha Christie novels and they were the fairly major ones such as comments on Poirot or the creation of Miss Marple (done in such an off hand and hilarious way by Donna that it simply is treated as a non-issue unlike “The Shakespeare Code” from last year which often forced quotes and titles in our faces”¦ though that could be that I’m just more familiar with the Shakespeare!) Let me frank though; this episode is NOT a parody. It is an affectionate, loving homage to the crime thriller genre, but with added sci fi twist. 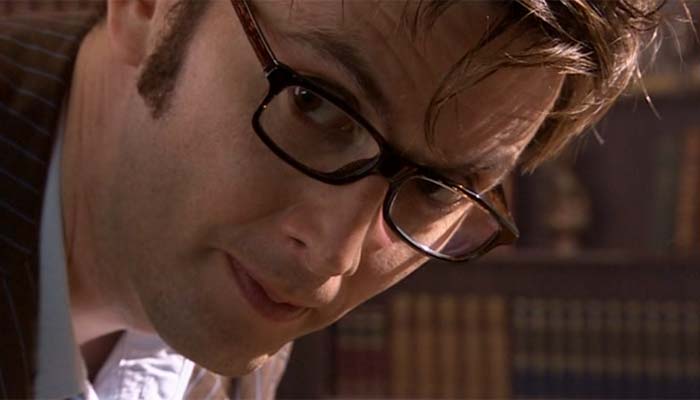 And it works. As the plot progresses, everything comes together, from locked rooms and giant wasps, to bits of dialogue at the start of the episode turning out to be key facets of information for the final reveal by Doctor and Christie. Everything follows neatly into the resolution of the story

It’s also nicely set around the circumstances of the real Agatha Christie’s life in the sense that it is widely documented that for a period of ten days, she completely disappeared. To this day, there is no knowledge of where she went and what happened. This episode chooses to provide one possibility for those events, which of course, intersected with the life of the Doctor.

The performances given in this episode really stand out; every actor gives it there all and there’s no attempt to mug it to the camera and go overboard. Every person involved on screen is clearly enjoying what they are participating in, perhaps none more so than Fenella Woolgar who plays Agatha Christie herself. She brings a real confidence and life to the character to the point that, where the Doctor works out the real core of the situation unfolding around them is entirely similar to the potential plots of her books even down to bizarre circumstances of death, you can believe in her as a real character when he says that she “”¦has lived” and knows people, how the smallest event can twist someone normal into a killer.

It’s only boosted by a farther scene where Donna and Christie have a heart to heart. Christie has just discovered her husband has been having an affair, and she’s not sure what that exactly means to her life. Donna compares it to her own life; she almost married a man who was colluding with a giant spider! This scene allows us to understand and sympathise with Christie as a real person, but it also allows us to see just how far Donna has come in her journey when she thought her whole world was ending.

That is good scripting and good acting.

I’m not going to launch into specifics of the plot. This is a murder mystery! Half the fun is in working it out for yourself and I’m quite pleased to state I had some good hunches about what exactly was occurring during the episode even if I never settled on anything concrete! You simply will have to trust in my recommendation and watch it.

That said, I can comment on our regulars. As of this episode, Perfect Ten and Noble Donna just became my favourite pairing in nuWho. She’s feisty. She’s argumentative. She’s funny. He’s bonkers. He’s serious. He’s a genius. They fit. They bounce off of each other in ways that Rose and Martha simply couldn’t because of the romance aspects of their relationships to the Doctor. Here these two can simply be friends with no unresolved feelings, who can snog each other if they need to, and generally rely on each other to be the one that fills in the missing gaps.

Watch the scene where the Doctor shows another biological advantage over being a Timelord compared to human. It’s a serious scene, played for laughs, and these are good laughs. It reminds me of the scene from the first episode where Donna and Doctor mime a conversation from opposites sides of an office. I thought that was brilliantly done, and this scene just tops it. It’s the script and the performance combined. Tennant and Tate work extremely well with each other and I can already tell I’m going to miss her when she’s gone.

Perhaps the only thing I can fault this episode on is some smoke effects used for the appearance of the giant alien wasp, or Vespiform as it’s called in the episode. I’ve had issues with the CGI smoke before in this series, it just never seems to look genuine. I did enjoy the look of the CGI Vespiform however. I liked the flashbacks with the wavy lines and I enjoyed the way that the flashbacks didn’t match exactly what the characters were saying”¦ you’ll know what I mean when you see it.

And I also particularly enjoyed the fact that Doctor Who is probably the only television on a Saturday night for kids where you will find murder, laughs, betrayal, genuine heartfelt emotion, and a gay subplot. On primetime TV and get away with it. It’s not even forced into the episode; it all fits and feels very natural with the episode and the times they are trying to portray.

Doctor Who also does the look of period set episodes rather well.

I’m at a loss for anything else to say. This episode isn’t about themes. It’s a homage to a brilliant writer and an acclaimed genre.

Four Inspector Smiths and Plucky Young Girls Who Assist Him out of Five. Can’t say fairer than that!